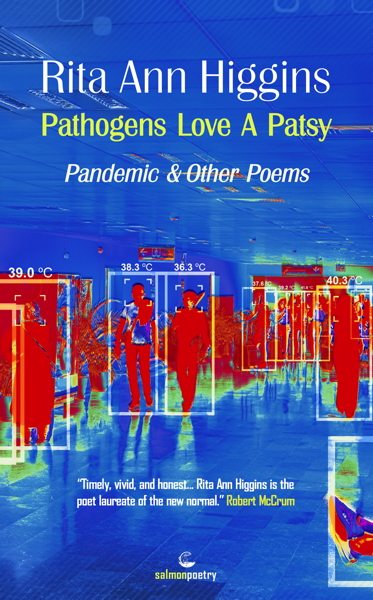 Pathogens Love A Patsy - Pandemic and Other Poems

“Higgins has a talent for tuning into our everyday lives, making the ordinary border on the epic…”

“Higgins's work does not function to keep anyone out, but invites them to sit on the back wall with her, looking in all directions from this edge.” 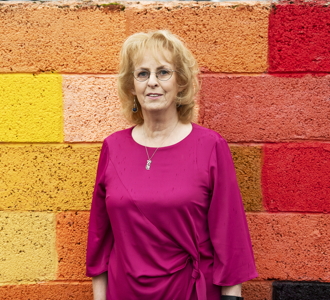 RITA ANN HIGGINS was born in 1955 in Galway, Ireland, where she still lives. Her first five poetry collections were published by Salmon: Goddess on the Mervue Bus (1986); Witch in the Bushes (1988); Goddess and Witch (1990); Philomena’s Revenge (1992); and, Higher Purchase (1996), as well as a memoir Hurting God (2010). Bloodaxe Books published her next five collections: Sunny Side Plucked (1996); An Awful Racket (2001); Throw in the Vowels: New & Selected Poems in May 2005 to mark her 50th birthday; Ireland is Changing Mother (2011), and Tongulish (2016). Her plays include: Face Licker Come Home (Salmon, 1991); God of the Hatch Man (1992), Colie Lally Doesn’t Live in a Bucket (1993); and Down All the Roundabouts (1999). In 2004, she wrote a screenplay entitled The Big Break. In 2008 she wrote a play, The Empty Frame, inspired by Hanna Greally, and in 2008 a play for radio, The Plastic Bag. She has edited: Out the Clara Road: The Offaly Anthology in 1999; and Word and Image: a collection of poems from Sunderland Women’s Centre and Washington Bridge Centre (2000).  She co-edited FIZZ: Poetry of resistance and challenge, an anthology written by young people, in 2004. She was Galway County’s Writer-in-Residence in 1987, Writer-in-Residence at the National University of Ireland, Galway, in 1994-95, and Writer-in-Residence for Offaly County Council in 1998-99. She was Green Honors Professor at Texas Christian University in October 2000. She won the Peadar O'Donnell Award in 1989 and has received several Arts Council of Ireland bursaries. Her collection Sunny Side Plucked was a Poetry Book Society Recommendation. She was made an honorary fellow at Hong Kong Baptist University in November 2006. She is a member of Aosdána. Our Killer City, a book of essays with poems, appeared from Salmon in 2019. In 2018 she wrote Straois / The Smirk, an Irish-language screenplay. In 2020, during the Covid-19 crisis, Rita Ann became The People’s Pandemic Poet Laureate for the Brendan O’Connor Show on RTE Radio 1.
Review: Pathogens Love A Patsy: Pandemic & Other Poems, by Rita Ann Higgins, reviewed by Amanda Bell for the Dublin Review of Books, 1 October 2020
Scourging Buffoonery
Cultural memory of the Spanish flu of 1918 is strangely absent from the literature of the period, but the same is unlikely to be said of the current pandemic, given the proliferation of creative writing projects documenting the communal experience of Covid-19 nationally and internationally. In Ireland alone, both UCD and TCD’s libraries are building collections related to the lockdown of 2020, and anthologies such as the Munster Literature Centre’s Poems from Pandemia are forthcoming before the end of the year. Salmon Poetry has been quick off the mark with the publication of Rita Ann Higgins’s Pathogens Love A Patsy: Pandemic & Other Poems, barely a year since the publication of her last collection This Killer City, and there’s no better person than Higgins to capture the zeitgeist.
The book is in three sections; the first consists of thirteen pandemic poems, most of which were broadcast on Brendan O’Connor’s Saturday morning programme on RTE Radio 1. Composed weekly from the lockdown in March to the end of June, Higgins’s poems vividly reflect the unfolding drama and its effect on the collective psyche, following a trajectory from panic through fear to suspicion, and then probing the cracks in social cohesion as she homes in on how the virus amplifies inequality, yet again having a disproportionate impact on the poor, the sick and the old. The pandemic section ends on an ominous note with “Nothing is Random”, the penultimate verse of which comments:

We have changed over these months.

It’s easier to tell ourselves we’re the same.

So much to process

and thinking differently is fatiguing.

We never got that memo,

or the one about mortality either.

You wonder why the person in the mirror

with the broken capillaries

is in your house, wearing your clothes.

It is a fitting point at which to segue into section two: “Poems of Isolation: I’m Hanna Greally (I want to go home).”
This harrowing thirty-one-stanza sequence is based on Hanna Greally’s memoir Birds’ Nest Soup (published by Alan Figgis in 1971), and is in the voice of a woman wrongfully incarcerated in St Loman’s Psychiatric Hospital in Mullingar for almost two decades in the 1940s and ’50s. The sequence is a timely reminder of the collusion of families and communities in suppressing individuals whose existence was regarded as compromising, embarrassing or financially inconvenient:

This was society’s cesspool,

Craturs were just left here and not claimed.

and just left them here.

Most important of all, it was free.

Three hots a day and a cot.

A prison by any other name.

Only, when you are sentenced in a court

you get a release date.

As elsewhere, the tone bridges outrage and a poignancy so understated and well-controlled as to be almost unbearable:

Here in the left-luggage department

the time passes out with the dust particles

and the dust particles win.

The force of inertia, the tease of tumbleweed.

All that possession and emptiness fills your days.

abyss with no bliss, thank you miss.

It’s not that we are all lost –

most of us were never found.

We were never lost, we were left.

The final section, “Poems Before Covid”, consists of fifteen poems ranging from a short elegy for Gay Byrne to swingeing critiques of institutional neglect and the failure of redress boards to adequately remedy the wrongdoings. “Change” strikes a disillusioned note:

It’s a six-letter word with no currency

when its demeaned by overuse, overdose.

Honeyed words you proffer, the silver lining is free.

Making a mockery out of change.

Will you vote for me?

A vote for me is a vote for change.

The collection ends with a drubbing of Oughterard residents who, encouraged by Noel Grealish TD (according to the epigraph), protested against plans for a direct provision centre there:

but most of all

and Oughterard says no.

As a snapshot of our times, Pathogens Love a Patsy is a reminder that while Covid-19 dominates the headlines, other societal problems are still seething in the background. The cover image by Sefa Ozel depicts human figures lit up by infrared temperature scanners. Scorching, like the poems within.
Amanda Bell is a writer and editor based in Dublin. Her most recent publication is The Loneliness of the Sasquatch, a translation from the Irish of Gabriel Rosenstock, Alba Publishing.  www.clearasabellwritingservices.ie

Other Titles from Rita Ann Higgins 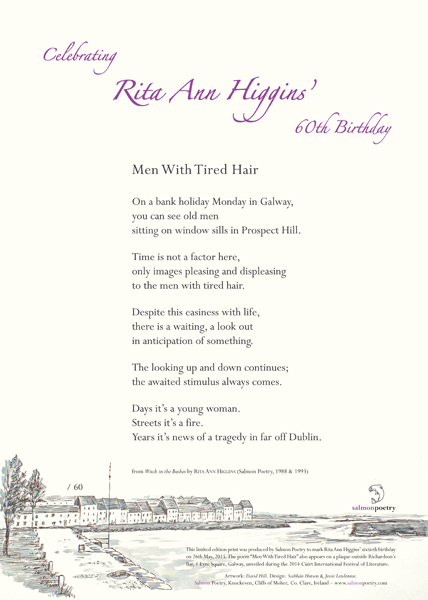 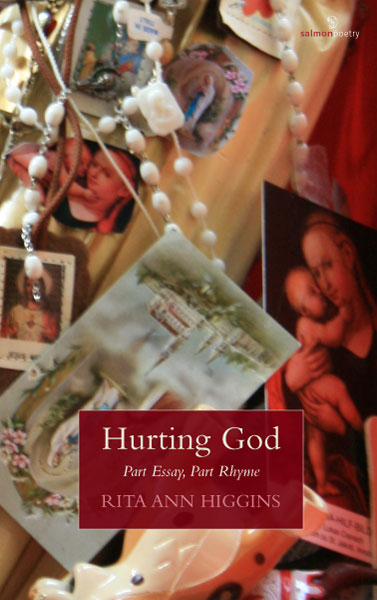