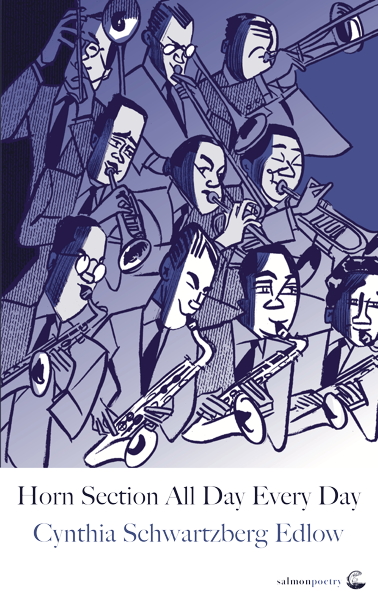 HORN SECTION ALL DAY EVERY DAY

Cynthia Schwartzberg Edlow’s new collection, Horn Section All Day Every Day, dazzles like a Brass band, wild and bold as a trumpet, delicately plaintive as a lone French horn. Although there are stunning poems about animals throughout, which shift the tone of the volume, at its heart is the story of Super Dan, an extraterrestrial superhero who comes to Earth to study and stays to marry the witty, earthy woman he falls in love with. “Love me and be my kiss,” Super Dan sighs to his wife. This book, a veritable “trove of ardor,” is filled with the emotional force and beauty of that love.

Old-school songs play through and beneath these soulful poems, the radio hits of rhythm ‘n’ blues pioneers like Solomon Burke and Junior Wells. Yet what lifts our journey to a whole other level is the presence of a winsome comic hero named Super Dan, an extraterrestrial with a canine curiosity about human life, from the alcoholic beverages we favor to the intricacies of women’s lingerie. Playing Virgil to our Dante, Super Dan takes us deep into that most mysterious of worlds, our own. Beauty awaits you, reader, as do laughter and music.

Spirited and poignant, funny and contemplative, the poems in Horn Section All Day Every Day bring us the world from a visitor’s point of view, sometimes literally, and all the time reminding us that, although we are just travelling through this universe, it’s what we do with our stay that matters most. Like the instruments of the title, these poems don’t stop; these poems wonder how we got here and why we must leave, they constantly assess and reassess the input the contemporary moment throws our way. It is not often I feel tender affection for a book, but Edlow has created a space of such hope and vitality in these poems, that, long after I put the book down, this splendor extended past the page and softened how I felt moving through this world we occupy together, now. 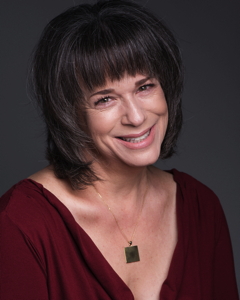 Cynthia Schwartzberg Edlow is the author of The Day Judge Spencer Learned the Power of Metaphor and Old School Superhero Loves a Good Wristwatch. She has won the Red Hen Press Poetry Award, The Tusculum Review Poetry Prize, Willow Review Prize for Poetry, a Beullah Rose/Smartish Pace Poetry Prize, and three Pushcart Prize nominations (2011, 2015, 2016), two of which were nominations from the Pushcart Prize Board of Contributing Editors. Her poetry has appeared widely, including: American Poetry Review, Barrow Street, Cimarron Review, Folio, Fourteen Hills, Gulf Coast, Live Encounters, The Los Angeles Review, Plume, Salamander, Santa Clara Review, Smartish Pace, Tahoma Literary Review, and Texas Review. Poems have been featured in anthologies, including: The Plume Anthology of Poetry 5,  Even the Daybreak, Drawn to Marvel, and The Emily Dickinson Awards Anthology.
Super Dan Comics Question Box Series #31:
“SAY I GOT RICH AND I’M NOT SAYING”
Super Dan: Say I got rich and I’m not saying
I want to be rich, and I’m not saying
I don’t want to be rich, but
say I was and I had a choice.
Full-time maid or full-time chef?
Please. No contest: I’ll take the chef.
No, a cook. Because a cook can cook,
where a chef spoons sauce
and froth. I’m saying you can live
with a little dust on the table or
soap scum or dishwasher pile-up,
but every day, three times a day, good food is a treasure.
And that’s why we say grace
over our food and not when we
turn on the vacuum.
Later that evening, without fanfare, Super Dan
left the expensive restaurant
shaking his head:
Why do I need a dictionary
just to eat a meal? Was that dessert menu
even in English? What was with that
“flight of wine,” that “ganache dribbled
with hothouse jam.” That “goat cheesecake.” Only a chef
would put goat-anything in a dessert.
I would have a cook serving up some
nice brownies or a simple, straightforward pie.
Give me a good stiff chocolate milk, a warm slice
of boysenberry pie, and I can come in for
that unprepossessing workhorse
of a landing you all covet. I can make
the streets palatable for law-abiding creatures
and also human beings
in this, our tumbling, trying valley.
“SUPER DAN NECESSITATES THE RESTROOM SPARINGLY”
Super Dan necessitates the restroom sparingly
and does not make a priority of meals
although he will, on occasion, eat a banana.
If Super Dan does admittedly take
of the banana, there is in the taking
no innuendo. Like Pig-Pen
from the lugubrious Peanuts series,
Super Dan enjoys a soot cloud swirling about him.
It renders him his super powers.
It enables him to broadcast gems
like this:
I was so mad at you yesterday
I couldn’t even watch TV.
Super Dan. My Yoko.
ONE TIME HE NOT ONLY LEANED DOWN BUT IN
…He wants
me to remember that trouble is a fire that
runs like a staircase up then down. Even
on a beautiful day in June.
—Nikky Finney
i.
The long-toothed icicles hang
from the back porch roof
on a bitter-cold February dawn.
Charles is a boy, quarreling
with his man-grown brother. Their shouts
glance off the kitchen walls, each cuff
shredding the morning air like a riot of hungry tigers.
The stovetop burners shimmer gas-high,
four blue-yellow, grease-clogged
controlled fires.
It is winter. Bone-stinging
on the soles and this season
will not be romanticized.
They are brothers and what comes out of their mouths
sounds like scrap metal
or inmost unintelligible squalls
ii.
when Charles turns to the stove.
The four real flames. Helpless, he thrusts
his right hand into the nearest flame, pulls out
the first stove grate, hurtles it at the brother.
He pulls another out
and another.
Does he hit his brother?
No, the man dodges them well.
iii.
Their mother, not more than one hundred pounds,
enters the linoleum-floored room.
The last burning grate whooshes
so intimately past
she can feel its scorch
at her caramel-skinned cheek.
Here the tale becomes half-anvil, half-smoke,
the weight of it collapsing on her, the stun
of her sons, younger one
crashing, a storm of brothers.
Only some deity could unbind
the wellspring Charles has since died for—
that she might have been killed by it, struck
and killed.
iv.
Against each basement wall,
toms stacked ceiling-high
in decreasing sizes.
Crisp cymbals, like amber amulets sparkling
off shallow light,
their discrete thicknesses harboring indefinite pitch—
and they once reminded him
that to relax is to incline roguishly.
When he was four, with a wooden spoon he’d
blister the black-handled dented pots
splayed on the kitchen floor.
Brisket and potatoes set upon the cotton-
clothed table lulled the room, finally.
Every dinnertime night his mother worked
amid the banging. A memory
his family holds fondly now. All his brothers. His sons.
It was then after the day of the winter fires
Charles crooked his insides tight,
but loosened his limbs
until they jellied, quick,
and reverberated, naturally
to become the approximate of a gentle child
whose right hand caressed the memory of a surge,
a rising through, and it
served to marry him
into the vigilant aborted manhood
of a drummer.
All Poems Copyright © Cynthia Schwartzberg Edlow, 2018

“Super Dan,” a hero from outer space, comes to Edlow’s consciousness to observe our humanity. These thought shards are in the form of “Super Dan Comics Question Box Series,” and they number 88 poems. Super Dan poems are interspersed with others: riffs on music, animals, brothers, baton twirling, policemen, drummers, and even a love poem to bison. What I’m telling you is this is encyclopedic high holiday where Edlow romps with language, risks everything, uses dialogue as if she invented idiom, and writes with high-octane energy.

Edlow houses her imagination in couplets, haiku, narratives and all respectable versification, but the end result is the same. The words burst at the seams with insistence to be original and incorrigible and seem to sayif poetry isn’t fun, who needs it. This poet is in her own lane, and manages structural success with unconventional methods. It’s intense reading because Cynthia Schwartzberg Edlow believes velocity is trajectory. The girl’s got game. She brings it, and her verbal connections are skill, not coincidence.

Only the trumpeters and Sharon

Good thing half-time is over.

with a flying metal rod

above the head. Keeping the free hand

L-shaped, and pretty all the time,

the non-stop smile even as her head is

thrown back to gauge

shimmering rotation against the overcast

sky. Blue skies disorient the game out of her.

Through a soft chilly schnapps fog

her mind revives the crown of her routine—

the forward bending at the cinched, spangled waist,

her mom rising out of her seat. Dad, silent.

She catches the descending baton

with her right shoulder blade. The wand jumps high, still

in revolution and on the arsis

she grabs it from the air like an oriole. Then kicks on.

Which is when the tassels finally get their due.

Other Titles from Cynthia Schwartzberg Edlow 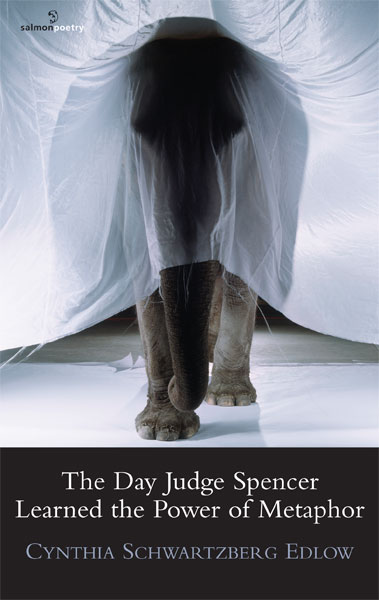 The Day Judge Spencer Learned the Power of Metaphor