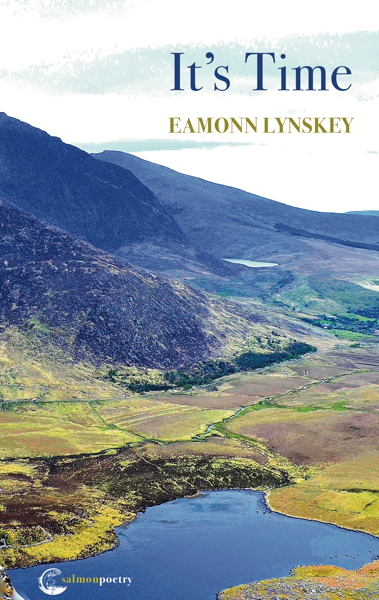 Eamonn Lynskey’s poetry first appeared in the New Irish Writing pages of the Irish Press in the 1980s, edited by David Marcus, and since then widely in magazines and journals such Poetry Ireland Review, Cyphers, The SHOp, Crannóg, The Stony Thursday Book, The Stinging Fly, Boyne Berries, Orbis, Riposte Broadsheet and the Irish Times. He was a finalist in the Strokestown International Poetry Competition and in the Hennessy Awards and has published two collections, Dispatches & Recollections (1998) and And Suddenly the Sun Again (2010). He has been involved in the organization of poetry events in Dublin for many years and has presented poetry programmes on local radio. He obtained an M. Phil in Creative Writing from Trinity College Dublin in 2012 and participated in the 2013 Stanza Poetry Festival in St. Andrews in Scotland. Before retirement he worked as a teacher and Adult Education organizer.

The Oldest Man-Made Object
in The British Museum
Beside the rooms where crowds admire
the ornamental clocks, the axe
of mottled ironstone, its top
worn smooth from constant use, its weight
spread out along its length, is what
we left behind in Creswell Cave;
our best Palaeolithic hi-tech
fifty thousand years ago.
Yet not the oldest man-made object
in The British Museum. Look here –
a chopping tool with scalloped edge,
the latest culinary gizmo
in the shops in Tanzania’s
ancient Olduvai Gorge
about two million years ago,
much older than the length of time
was ticked by all the clocks next door,
combined. And though a bit the worse
for wear, it still looks sharp enough
to take the finger off a careless chef.
All Those Thousand Souls
This poet never had a lump of shrapnel
wedged inside his head or sat bewildered
in the bombed-out wreckage of his home –
such devastations never known to him
he prays won’t be diminished by this poem
that carries so much grief it could explode,
eviscerate itself, leave empty slogans
twitching in their helplessness like bodies
strewn around a cratered market square.
He reads his poem aloud and all the lamed,
the halt, the maimed come crowding in around him,
families collaterally damaged,
whole communities destroyed by air-strikes,
all those thousand souls condemned to die
in Dhaka so that he might buy cheap clothes.
He vows to do the everything he can:
check High Street labels carefully, choose
Fairtrade products, compose angry poems.
Home an Hour
Out of hospital, I promised time
to offer up my thanks for readmission
to the marvellous: the mountains
drinking water from the skies,
the streams that spill down into rivers,
filling lakes and reservoirs
to splash into my kitchen sink.
Just home an hour and I begin
to worry about new water charges, am
again become immune to the miraculous.
Copyright © Eamonn Lynskey 2017
Review: It's Time reviewed by Susan Norton for Live Encounters (Oct 2018)
Sue Norton writes essays, reviews, and literary criticism and is a lecturer of English in The Dublin Institute of Technology
Irish poet Eamonn Lynskey’s volume of verse called It’s Time, published by Salmon Poetry (2017), is self-conscious in literal and beautiful ways — literal in its articulations, beautiful in its aspirations. “All Those Thousand Souls” (25) begins, “This poet never had a lump of shrapnel wedged inside his head or sat bewildered in the bombed-out wreckage of his home–”.  It then guides the reader through the devastating violence and loss suffered by families in Bangladesh to conclude that the poet can and should continue to do what little and whatever he can to assuage suffering, including “check High Street labels carefully, choose Fairtrade products,” and yes, “compose angry poems.”
Such incantation to power over powerlessness typifies Lynskey’s tone throughout the collection.  He is highly attuned to pain and injustice in life, but not at all overcome by it. His poems ask us to ask ourselves questions and thus insist that change is not only worthy of us, but incumbent upon us too.  In “Deposition” (24), for instance, an unidentified body is found in the night, possibly hanged, yet the women who come upon it in the morning do not look away. They pray over it and leave behind flowers, human compassion once again lighting the way toward tomorrow.
In “Listening to My Elders” (19), the first person speaker identifies with those in recent history who have “just followed orders” in carrying out atrocities. By accepting the probability of obedience to maniacal power in times of genocide or brutal colonial expansion, the narrating voice self-incriminates for crimes committed while also rhetorically suggesting the likelihood that many of us would protect ourselves through collusion with evil too. The message?  We must guard society against the rise to power of corrupting forces so that none of us will ever find we are about to “machete severed limb from torso.”
Such up-close, at times unflinching and always highly specific language of both ordinary and extraordinary human experience is characteristic of Lynskey’s composition. Read aloud, his lines trip easily off the tongue because his lexicon is so common to the words we use with each other every day. His syntax, while never convoluted, still achieves a lyrical quality. Lynskey’s touch is light, his syllabication deft, and his verse thematically inviting for readers of all kinds who wish to ruminate on life as we know it, in the here and now, because every “going forth” is “a risk,” every “safe return a victory.  And until our “Final Notice” (66), there is still time to achieve a higher purpose.
Review: It's Time reviewed by David Troman for Orbis International Literary Journal  #184
The blurb on the back of this third collection says that the verses offer questions, not answers. However, it seems to me a partial truth because Lynskey does ask about things, although in a manner which makes the readers think they conceived such questions for themselves. He deals with all aspects of life: faith; conservation: personal relationships. In each case, the answer is inherent in the asking, implying therefore further questions -– do I want to contribute to making an answer a reality, and if so, how and when? For Lynskey, the third question is answered in the title.
The writer clearly feels passionately about his subjects, yet the 'ordinariness' of the language is as dispassionate as a barrister presenting a logical case. Often, it's with a dry sense of wit, for example, in 'Neanderthals':

Whereas there is this 'widespread idea

that Neanderthals had haggard haircuts,

went half-naked. had a wild-eyed stare,

and killed and chopped each other up for food;

among themselves and did not soil the ground

where they lay down to sleep, and loved their kids,

and hoped for happiness. And then we came along.

In the latter part of the collection, the focus is on the issues particular to Ireland. In 'Speaking of the Past', we find a desire for unity between people, manifested through Catholicism:

It was all a tapestry of love –

divine, not flesh and blood –

with pictures of the Sacred Heart

We didn't have that point of purchase

and view the whole embroidered cloth

and find it all a work of human hand.