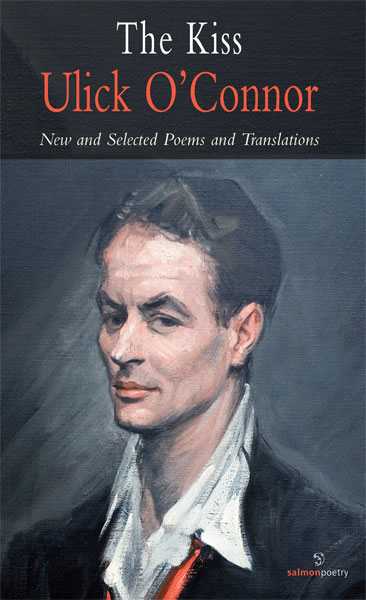 The Kiss - New and Selected Poems and Translations

Ulick O'Connor's first book of poems Life Styles was published by Hamish Hamilton and Dolmen Press in 1975. He went on to write five others among them All Things Counter (1985), and One is Animate (1990). His translations of Baudelaire were published by Wolfhound Press in 1995. It received an outstanding reception and Michel Déon of Académie Francaise wrote in introducing it:

'The poem is reborn before our very eyes and is music to our ears, not translated but recreated. I am rendered speechless. The poet O'Connor offers to the poet Baudelaire an unparalleled "treasure"'.

Ulick O'Connor is also noted for his verse plays in the Noh form. He was guest of the Japanese Government in 1995 when he went out to work with the Japanese National Theatre. His best known work in this form Deirdre was revived this year and played alongside Yeats 'Deirdre' in the National Library celebrations of the poet's work.

Ulick O'Connor's books include biographies of Oliver St. Gogarty, Brendan Behan and the highly successful Celtic Dawn, a portrait of the Irish Literary Renaissance. The Ulick O'Connor Diaries published in 2001 by John Murray London were much praised by English critics, the Times (London) comparing him to Boswell. His successes as a playwright include Execution described by the Evening Standard as "dynamite"; Joyicity by the New York Times as "supreme", and his duo about Oscar Wilde, A Trinity of Two as "elegant, probing and beautiful" (The Stage).

Your eyes shone as if you'd seen
The first spring quiver into being,
That morning when I brushed your lips
To win you back from sleep's eclipse.
Had we slipped our moorings in a race
Beyond the edge to another place?
But the oars were set; you won't deny this
We touched lands fabled as Atlantis.

ULICK O'CONNOR, a notable chronicler of 20th-century Irish writing and writers - he has written biographies of Gogarty, Behan and the much celebrated Diaries - is himself an immediately recognisable public figure.

A rather mannered portrait of him, circa 1958, by Patrick O'Connor, on the cover of The Kiss, mirrors the late Romantic "poetic" style of earlier poems such as Awakening: "That morning when I brushed your lips/ To win you back from sleep's eclipse".

The shorter free verse form of later books All Things Counter (1986) and One is Animate (1990) seems more attuned to his personality - lines from the poem Louis MacNeice capture intimations of that poet's early death: "I saw him in his last year / at some Joyce affair outside the tower / looking granite faced, away from the sea".

His translations of Verlaine and Machado are poignant, liberating him somehow from the "poetic stance" that tended to blight the earlier work - poems such as From Prison - and articulating his stance on human rights: "God, O God, out there is life,/ Simple and apart,/ How peaceful that murmur comes/ From the village heart".

The final, 18-poem sequence, versions of Baudelaire's Les Fleurs du Mal from Poems of the Damned, are a tour de force of interpretation - the petulance, the exuberance, the passion of the mid-18th century French poet (whose poems remained banned until 1949) mirror O'Connor's own personality - his sense of outrage at injustice, his singular defence of the rights of the individual.

Eugene O'Connell's most recent collection of poems, Diviner, was published by Three Spires Press. He is editor of the Cork Literary Review.


Ulick O'Connor is known primarily as a dramatist, literary critic and biographer. Although his first volume Life Styles was published in 1973 by the Dolmen Press, to be followed by five further collections, his name does not often feature in the agora of poetic remembrance or celebration. The Kiss, which includes new and already published poems, is therefore welcome in offering a critical overview of O'Connor's work as a poet. What is immediately striking about the poems gathered here is the ease with which O'Connor moves between private statement and public pronouncement. He clearly has a sense that private and public histories are more porous than the constabulary of fact would have us believe and that poetry can be as much about expressing an uncomfortable political truth as giving voice to the key-hole surgery of jealousy. Yeats is an inescapable presence here, though O'Connor is more tentative, less tempted by the marmoreal self-fashioning of the Public Figure.

One of the consequences of having lived through and extensively studied and commented upon the Irish twentieth century is O'Connor's ability to restore a living presence to the people, both the exalted and the humble, who have shaped the island. In his 'Homage to Sean MacBride' MacBride is presented as both the gifted offspring of a privileged family, magnified by the dual mandate of history and culture, and as the relentless activist, unremittingly ordinary in his daily grapplings with injustice ('In that book-lined room I watched many a night / You finger out a clause, begin the flight / To save some man'). MacBride emerges not as the plaster saint of right-on hagiography but as a man whose past became a resource rather than a burden. The range of intelligent sympathy extends poetically to the world brought to bear on the young O'Connor as he was taken around the Church of the Three Patrons in Rathgar by his nanny, Ann Bell. Even though he can no longer share the piety of his childhood nursemaid his poem has due reverence for the integrity of her belief and the rituals which sustain her living self. Part of the attentiveness to people involves an attentiveness to their practices and contexts. O'Connor tries to capture what is distinctive about both the season and the session. In 'Autumn Scare', for example, he uses the language of menace to define the dramatic flare of an Irish autumn:


But today fear crackled off the crop,
Time has telescoped to make it seem
A week since Fall last fired the trees' top.

Looking to that most difficult of things, evoke the music of performance in the music of a poem, O'Connor in 'The Piper's Club' wonders what kind of utterance might match the disciplined abandon of the fiddler 'Who saw a blackbird in a gap of light / And trapped its sweetness on a tightened string.' If the early Clarke is somewhere close, it is in part because O'Connor too discovers, through the good offices of the poet and scholar Gerald Murphy, the lyric expressiveness and vernacular energy of writing in Irish. Part of the debt is reciprocated in his rendering of an Irish-language poem by Brendan Behan concerning Oscar Wilde. There is a danger, of course, attendant upon too much informed sympathy - national hubris, Ireland and the Irish as the Chosen Ones. O'Connor is saved from the vaporous self-importance of national myth-making by a robust and combative satirical sense.

In a poem written at the time of the Papal visit to Ireland in 1979 and entitled 'The Department Regrets', the poet excoriates 'our concerned Rulers' who made sure that beggar children were removed by the police from O'Connell Bridge 'Concerned that His Holiness might see / How we Christians love one another.' The chilling title of the poem has an even more disturbing resonance in terms of what we now know about institutional child abuse as practised by Church and State. In 'Easter Week 1986' O'Connor comments on the absence of an official commemoration of the 1916 Rising and the actions of the GardaÃ­ in firing live ammunition over the heads of unarmed demonstrators outside the GPO:


Divided, exhausted, confused spectators
Of an uneasy dawn,
While police fire above the head
Of crowds, for imagined slights,
Their backs turned on that sacrificial shed.
How long before they lower their sights?

On a less despairing and more puckish note, O'Connor in 'One Up' describes how he bested his French rivals for the affections of one of their compatriots intimating that eight hundred years of misery could be turned to good account:


None of her fancy French boys
Could do what I could do
Because they lacked, you see,
Centuries of agony.

O'Connor includes translations of poems by Machado, St John of the Cross and Quasimodo but his literary affections, not unusually for Irish writers of his generation, are first and foremost to France. One of the strongest poems in The Kiss is simply entited 'Marcel' and deals with the last two years of the French writer's life - private obsessions contrasted to the calamitous killing of the Great War - and the uneasy morality of art in an age of slaughter:


He could claim the sheafs beside his bed
Would live, when millions more were dead.

The most substantial engagement with French writing takes the form of translations of eighteen poems from Charles Baudelaire's Les fleurs du mal (1857). The translations are ambitious in that they seek to retain the formal music of Baudelaire's writing, particularly the use of end-rhyme. Such attempts can often go disastrously wrong and the annals of literary translation are rich in the grotesquerie of botched attempts at formal equivalence. O'Connor, however, manages on the whole to convey the musical integrity of the verse while not sacrificing sense to the iron laws of the soundboard:

My ears deafened in the street's mayhem:
A woman in full mourning passes by
Majestic, sad, a languid hand held high,
Lifting and balancing the borders of her hem.

Baudelaire like Rimbaud and Verlaine has had no shortage of suitors in English but O'Connor's translations are notable for their keen sensitivity to the range of Baudelaire's effects in language. An interest in the possibilities of song is a major contributory factor to the success of the translations, and in compositions of his own such as 'Immortality' or the drama extract 'Lament for Naoise', it is possible to hear again and again the particular harmonies of the sung line. O'Connor, who celebrated his eightieth birthday last year deserves a wide and sympathetic audience for a collection which gathers together then highpoints and heartbreak of a life wholly given up to the waywardness of the word.

The Kiss is a collection of poetry from acclaimed author Ulick O'Connor, who has been around the block on the literary battlefield. Gathered over the course of decades, his work tells much of his life and the changing times. A surefire treat for poetry lovers, The Kiss is not one to be missed.

I often sensed in the crow's caw
Something akin to the death rattle,
But now, as surgeons hurried to and fro
Arming their team for battle,
I watched a black blanket of crows
Shaken out from the trees' sheet,
As in a great clatter of noise they rose,
I thought I never heard anything so sweet.