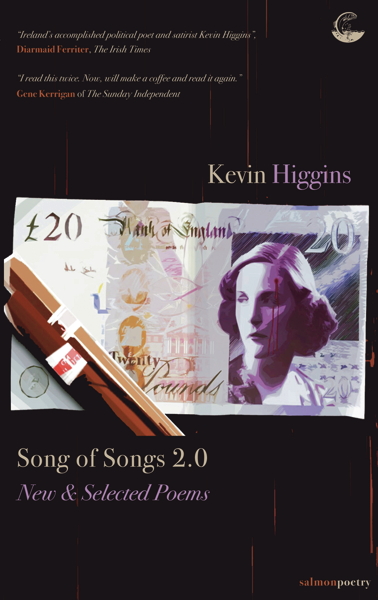 “I read this twice. Now, will make a coffee and read it again.”

Gene Kerrigan of The Sunday Independent

“The satirist trades balance for excess, overstatement and savagery, uncovering the hidden dissonances of the social process. Prominent among the younger poets to have set themselves this challenge is Kevin Higgins… Satire is a form of war by other means, and… Higgins shows himself an enthusiastic (verbal) combatant.”

“Likely the most widely read living poet in Ireland.”

“Higgins picks apart the human condition, its disappointments
and indulgences, with vigour and acumen.”

“His contribution to the development of Irish satire is indisputable… Higgins’ poems embody all of the cunning and deviousness of language as it has been manipulated by his many targets... it is clear that Kevin Higgins’ voice and the force of his poetic project are gaining in confidence and authority with each new collection.”

“With backstage guardians in Paul Durcan (see his titles) and Patrick Kavanagh, Kevin Higgins's work has a buoyant spoken immediacy (often taking the form of dramatic monologues), his poems springing out of colloquial address and celebrating the ordinary through a use of quotidian bric-a-brac, which he often pits - with positive effect - against larger (but no more important) forces…Comedy is part of his poetics, and what I especially like in his work is its swiftness of wit, its tone of buoyant contrarianism and jubilant disappointment”,

“It is a profound compliment to the quality of Kevin’s writing that you can disagree with the content and yet find yourself still reading on and appreciating the style. You’d have to say that he is one of the lead poets of his generation in Ireland at this stage.”

“Gil Scott Heron’s The Revolution Will Not Be Televised as re-told by Victor Meldrew”.

“Higgins is a genius, because he does something only great poets do: he writes with a voice that is entirely his own, in a style he has invented, about themes and concerns that now are instantly recognisable as his terrain.” 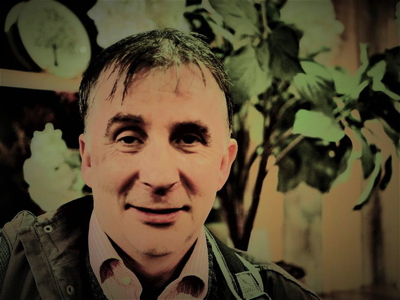 KEVIN HIGGINS is co-organiser of Over The Edge literary events in Galway. He has published five previous full collections of poems: The Boy With No Face (2005), Time Gentlemen, Please (2008), Frightening New Furniture (2010), The Ghost In The Lobby (2014), & Sex and Death at Merlin Park Hospital (2019). His poems also feature in Identity Parade – New British and Irish Poets (Bloodaxe, 2010) and in The Hundred Years’ War: modern war poems (Ed Neil Astley, Bloodaxe May 2014). Kevin was satirist-in-residence with the alternative literature website The Bogman’s Cannon 2015-16. 2016 – The Selected Satires of Kevin Higgins was published by NuaScéalta in 2016. "The Minister For Poetry Has Decreed" was published by Culture Matters (UK) also in 2016. Song of Songs 2:0 – New & Selected Poems was published by Salmon in Spring 2017.

Kevin is a highly experienced workshop facilitator and several of his students have gone on to achieve publication success. He has facilitated poetry workshops at Galway Arts Centre and taught Creative Writing at Galway Technical Institute for the past fifteen years. Kevin is the Creative Writing Director for the NUI Galway International Summer School and also teaches on the NUIG BA Creative Writing Connect programme. His poems have been praised by, among others, Tony Blair’s biographer John Rentoul, Observer columnist Nick Cohen, writer and activist Eamonn McCann, historian Ruth Dudley Edwards, and Sunday Independent columnist Gene Kerrigan; and have been quoted in The Daily Telegraph, The Independent, The Times (London), Hot Press magazine, The Daily Mirror and on The Vincent Browne Show, and read aloud by Ken Loach at a political meeting in London.
He has published topical political poems in publications as various as The New European, The Morning Star, Dissent Magazine (USA), Village Magazine (Ireland), & Harry’s Place. The Stinging Fly magazine has described Kevin as “likely the most widely read living poet in Ireland”. One of Kevin’s poems features in A Galway Epiphany, the final instalment of Ken Bruen’s Jack Taylor series of novels which is just published.
His work has been broadcast on RTE Radio, Lyric FM, and BBC Radio 4. His book The Colour Yellow & The Number 19: Negative Thoughts That Helped One Man Mostly Retain His Sanity During 2020 was published in late by Nuascealta. His extended essay Thrills & Difficulties: Being A Marxist Poet In 21st Century Ireland was published in pamphlet form by Beir Bua Press in 2021. Ecstatic is Kevin’s sixth full poetry collection.
Selfie

My hair is the grass
on the local five-a-side pitch
at the end of the worst winter
since nineteen forty seven.
My eyebrows, more
than my personal groomer—
the cat— can handle right now.
My eyes are light blue jellyfish
floating in increasingly
opaque sea-water.
The fuzz up my nose,
and in my ears, that patch
of grass the university groundsman
keeps forgetting to cut.
My ears, two elderly uncles
successfully avoiding each other
at opposite ends of a wedding.
My skin, the well-thumbed book
you picked up in a charity shop,
and never got around to finishing.
In their last exam, my lungs
got fifty three per cent,
so won’t be going to university
unless I give them to medical science.
My belly is one of those small insults
you get away with
because you’ve had Champagne,
but should generally keep
itself to itself.
My penis is a vintage car
one only takes out
every so often.
My knees and ankles are machinery
made almost obsolete
by recent developments.
The crack down the gable wall
has moved and is now
within me.
Manifesto of The Last International: Address To The Men and Women of Waterlooville

with a little help from Darrell Kavanagh & Quincy Lehr

Our movement will be henceforth called
Death to Bruce Forsyth. We will abolish all
immigration controls.  Burqas
will be mandatory for supporters
of West Ham United and Millwall.
We will re-appoint Lord Reith
(1889-1971) Director-General of the BBC.
There will be compulsory German lessons
for the unemployed. Sexual congress
between residents of Basingstoke
will be prohibited forthwith. The Church
of England and National Coal Board will be merged.
Public schools will be converted into saunas
for unconsenting homosexuals.  Local bus services
will be replaced, as of January 2016,  with sedan chairs
carried by ex-members of the newly extinguished
Confederation of British Industry.
The smoking of Slim Panatella cigars
will be compulsory for school children
from year three onwards. Each workday
will begin with the singing
of the collected works of Gary Glitter.
The capital of England will rotate
triennually between Crawley, Havant and Bordeaux.
The new twenty pound note will bear the mugshot
of the late Unity Mitford with tastefully drawn on
gunshot wound. We will declare war,
first on Tibet, then on ourselves.
Exit

for Darrell Kavanagh in his hour of need

There will be no more thunderstorms
sent across the Channel by the French,
no acid rain floating in from Belgium.
Pizza Hut will offer a choice of
Yorkshire Pudding or Yorkshire Pudding.
You’ll spend the next twenty seven bank holidays
dismantling everything you ever bought from IKEA.
The electric shower your plumber,
Pavel, put in last week will be taken out
and you’ll be given the number of a bloke
who’s pure Billericay. Those used to caviar
will have jellied eels forced
down their magnificent throats.
Every fish and chip shop
on the Costa del Sol will in time
be relocated to Ramsgate or Carlisle.
All paving stones laid by the Irish
will be torn up to make work
for blokes who’ve been on the sick
since nineteen seventy six.
Those alleged to be involved in secretly
making spaghetti bolognaise
will be arrested and held
in a detention centre near Dover. Sausage dogs
will be put in rubber dinghies
and pointed in the general direction
of the Fatherland.  Neatly sliced
French sticks topped with Pâté
will make way for fried bread
lathered with Marmite.
There’ll be no more of those new
names for coffee your gran
can’t pronounce. The entire royal family
will be shipped back to Bavaria, with the exception
of the Duke of Edinburgh who’ll be given
a one way ticket to Athens.  Curry
will no longer by compulsory
after every twelfth pint of Stella,
which itself will only be available
by special permission of the Foreign Office.
We’ll give India back its tea, sit around increasingly
bellicose campfires in our rusting iron helmets,
our tankards overflowing with traditional Norse mead.
Copyright © Kevin Higgins 2017

Other Titles from Kevin Higgins 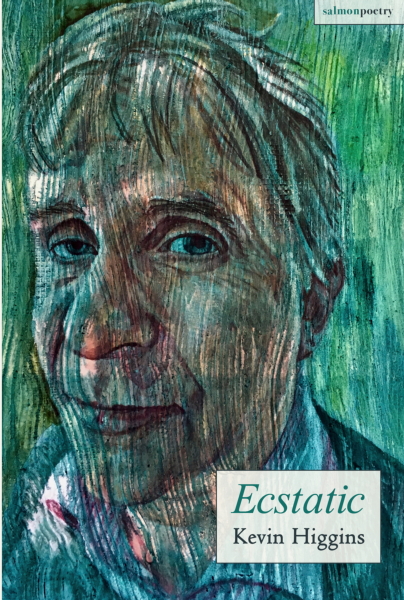 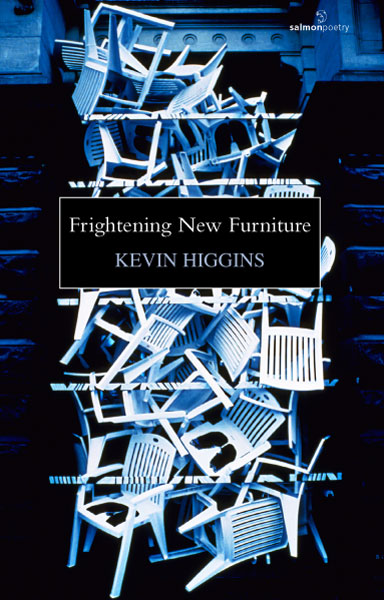 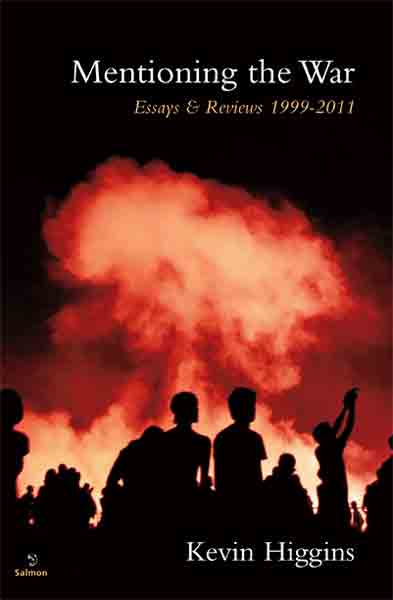 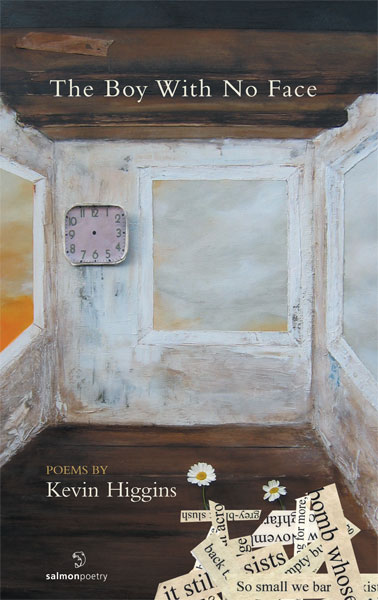 The Boy with No Face 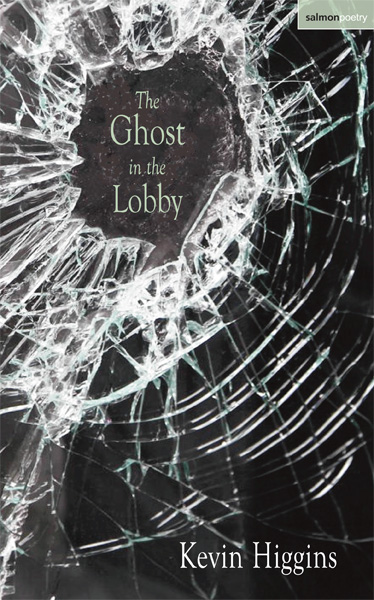 The Ghost in the Lobby 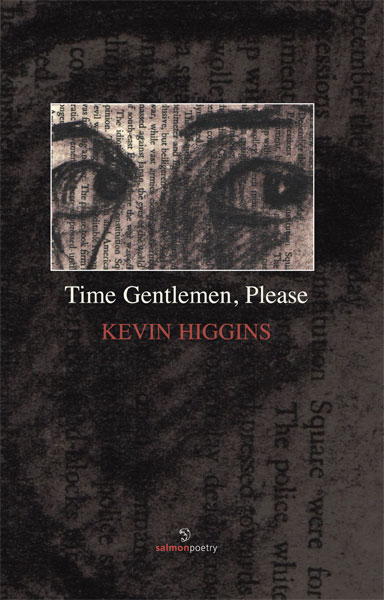