Are you ready? / John Corless 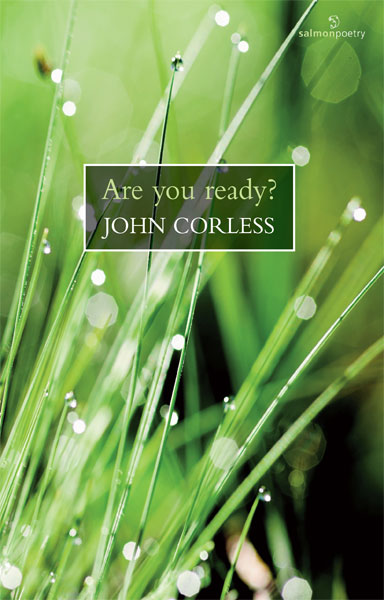 "John Corless comes to poetry with an infectious enthusiasm. He has imbued his work with a sense of discovery and wonder. His debut collection is gritty and irreverent, infected with copious amounts of tongue-in-cheek humour. Here you will find fake tan and calf nuts, the PDs, dancehall fights and dry cash hid behind dressers by dead bachelors. This is not a naive nostalgic sojourn through rural Connaught but an uncompromising white knuckle ride through sometimes dark and menacing places where sacred cows are put through their paces before being loaded up in a trailer and driven unceremoniously out to grass. You have been warned."

John Corless lives and writes in County Mayo, Ireland. His poetry is a mix of political, satirical and rural and has been described as 'Paul Durcan meets The Sawdoctors.' He has an MA in Creative Writing from Lancaster University (2008) and is currently researching for a PhD. He writes poetry, fiction and drama. His work has been published in magazines and collections worldwide. He teaches creative writing in the Castlebar campus of GMIT (Galway Mayo Institute of Technology). This is his first collection.
A Life

You spent years going to dances.
The Maple, The Arcadia
and festival marquees
pitched in after-grass
and if the one you liked wouldn't shift
you pretended you liked
the one you shifted.

You shifted Noreen Cassidy in 1968
but her father shifted you
when he heard about you after Mass.
You had an eye for Anne Danaher
and for her cousin from Manchester
in the yellow hot-pants.
You couldn't understand
when Kathleen Byrne
refused you in 1972.
Her land was next to yours.

You drank bottles of stout
with three generations of lads
and made smart comments
about their girlfriends
behind their back.
You were waiting, you said,
for a good-looking young one -
someone with prospects.
Someone like Teresa Dowd -
the District Nurse.

She found you last Friday -
stretched in the cottage for over a week.
Fourteen thousand stuffed
behind a plate in the dresser:
a picture of Big Tom on the mantelpiece.
Reviewed by Grace Wells for The Stinging Fly, Winter 2009-2010

Nothing escapes John Corless's wry wit, his derisive eye and his urge to shake things up to make the world a better place.  Corless's success is challenged by the fact poetry and humour can make for uncomfortable bedfellows. Poetry thinks wit pulls her toward stand-up comedy, she blushes at its vulgarity trying to make everything nice again, wit's a little too insistent that it really is funny, she feels deeply you're not supposed to laugh when you're doing this, wit wishes she'd lighten up. They banter back and forth only occasionally forgetting themselves to create the kind of unions that make writers attempt to marry them in the first place... The ultimate danger of amusing poetry is that it can have a kind of firework-display effect, one pop and you really can't go back to it again. What makes Corless overcome this is the fact he's a very fine straight poet. There are a good number of strong poems here, and 'Abandoned Railway,' an emigration poem through now-defunct, Western-seaboard train stations, stands out...

The first of two days on publications from Ireland's Salmon Poetry. First up, John Corless, who is the kind of man next to whom you wouldn't wish to be sitting if you were trying to balance something precious on your nose, or hoping to concentrate on your navel. He is funny, cubed, and like many of his compatriots, as droll as you might hope to find. I spent seven consecutive breakfasts with him one week, and starting the day off with a dose of laughter is better than prunes any day. So I admit to warming to his poems after just seeing his name emblazoned on the cover. I may have the advantage on you.

Are You Ready? , his debut, establishes itself with an impious, impish dedication: 'To the people who refuse to lie under the juggernaut of depression sweeping Ireland. To the rest: read on and cheer up.' Its forty-six poems suffer fools gladly, welcome them in, even, whether they are feckless husbands, besotted priests, Irish bureaucrats, or those who long to own their own chip-shops. The put-upon women of Ireland are best represented by the speaker of 'And Another Thing' who insists

leave the mortorbike in the hall,/don't try bringing it upstairs again,/the smell of petrol/ gives me a headache


Another wife regrets the moment she missed her chance to bail out when, on her wedding day, she is picked up by a white Mercedes with a suspicious history:

Inside, where there should be champagne/ and flowers,/ a half-bag of calf nuts,/ jump leads and a drum of diesel


I wouldn't want to give the impression that the poems here are one torrent of gags after another: there are quiet poems about solitary lives, perhaps best epitomised by the bitter-sweet elegy 'Going Through Your Things', which jumps straight in:

We found them in the strangest places -/ blue twenty-pound notes -/ in cups on the dresser,/ in westerns with big print,/ and a bundle in the freezer./ Fifty-two of them; stashed carefully/ just in case we needed anything.


And I won't spoil it for you by quoting the best two poems. The first is couched as a letter from a hospital to possible cancer sufferers who might or might not have had a test, and might or might not want to know that the results might or might not have been correct. the other one is the last poem, in which a congregation is discovered at mass, thinking not of the holy rites, but of the bargain hairdryers in Aldi's imminent sale, except to say that it contains a brilliant touch in which the bald priest's words are said to go 'over the heads of the congregation'. I laughed out loud the first time I saw this poem, and I laughed aloud when I read it again, and I laughed aloud when I looked at it again just now.

This is a great collection - 12 very bargain euros. Invest early for Christmas.

If you only buy one book this year, make sure it's Are you ready? - a satirical and humorous collection of poetry by the one-and-only John Corless.

The Claremorris man who also writes drama and fiction and teaches creative writing in GMIT, has just launched his debut collection and his poems are certainly far removed from those we learned at school.

John's poetry is a mix of political, satirical, ecclesiastical and rural and has been described as Paul Durcan meets The Sawdoctors. He has an MA in Creative Writing from Lancaster University (2008) and is currently researching a PhD. John's work has been published in magazines and collections worldwide... mind you, some of his poems have been referred to the Attorney General for approval!

Are you ready? contains a total of 46 poems, some just a few lines long and some that go on for pages. But, lest one would think that John's poems are like those by another author, rest assured that you definitely won't be bored reading this book. Side-splitting humour and tongue-in-cheek commentary are synonymous with John's poetry. And, when it comes to putting pen to paper, John clearly doesn't hold backk.

On Friday night in Claremorris, John had a packed audience falling off their seats with laughter as he read from his book for the formal launch. Are you ready? is a fantastic collection of poetry by the Claremorris man but, be warned, it may not be everybody's cup of tea!