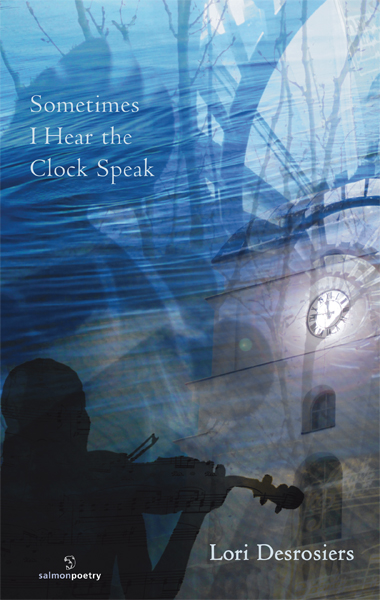 Sometimes I Hear The Clock Speak

"Opening this new book by Lori Desrosiers you will find of memory and search, of second-thoughts and playful indecisions, poems that go back in time to retrieve music and mend heart.
Indeed, the reader will find all kinds of music here:  there is a violin that lacks music and there is a brother’s voice that speaks like father’s – but not when he sings.  There is a reveille at 7.15am, and there is a young baby whose voice is known by her singing. And it is music that brings half-deaf father back from the dead. Page after page the reader will come to learn that it is memory – that beautiful, final chord, which reveals us to ourselves, and yet is unwritten by us." 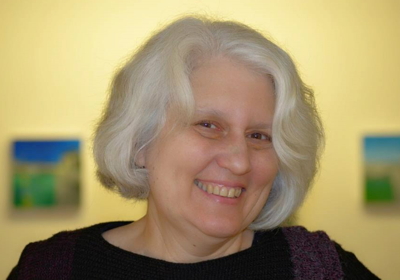 Lori Desrosiers’ other poetry books are The Philosopher’s Daughter, Salmon Poetry, 2013, and Sometimes I Hear the Clock Speak, Salmon Poetry, 2016. She has two chapbooks, Inner Sky (2015) and typing with e.e. cummings (2019), both from Glass Lyre Press. Her poems have appeared in New Millennium Review, Cutthroat, Peacock Journal, String Poet, Blue Fifth Review, Pirene's Fountain, New Verse News, Mom Egg Review, and many other journals and anthologies. She was a finalist for the Joy Harjo poetry contest and the New Millennium contest. Her poem “about the body” won the Liakoura poetry award from Glass Lyre Press. She holds an MFA in Poetry from New England College. Her work has been nominated for a Pushcart Prize. She founded and edits Naugatuck River Review, a journal of narrative poetry and Wordpeace.co, an online journal dedicated to social justice. She teaches Poetry in the Interdisciplinary Studies program for the Lesley University M.F.A. graduate program. Her website is loridesrosierspoetry.com.
Review:  Sometimes I Hear the Clock Speak reviewed by Dennis Daly (April 2016)
Samba scat, pot-laced giggles, a baby crying in tune, bugled reveille, a cantor’s baritone, the thwap of a heron’s wings, the hiccup of time, and many other lyrical moments punctuate the deep mnemonic resonance flowing through Lori Desrosiers’ captivating new poetry collection entitled Sometimes I Hear the Clock Speak. These poems shimmy successfully past the emotional complexities of life with organic joy and growing perception. Desrosiers’ words thrill with the thrum of life needing to be lived.
In her piece, The Year of Bad Decisions, the poet splices aural childhood memories with adult concerns. The touch is light and the onward movement detailed and deepening. Desrosiers acknowledges life’s events with nods of interest, her eyes always returning to the yet-to-be determined future. A brother’s trombone competes for attention with the poet’s violin in the heart of the poem. Neither prevail.

We’d practice in our rooms upstairs,

his bleating drowned out my high notes.

Mother begged us to take breaks,

tempted us with plates of Ritz and cheddar,

a bribe to soothe her delicate ears, knowing

full well we would start again next day.

Perhaps we were the reason she spent so much

time out of the house, finding excuses to leave

us alone for hours on end, we didn’t know

her newly single life or what she did at night.

Found out later she was dating the chorus teacher,

whose classroom both my brother and I attended.

It’s Hard to be Six, Desrosiers poem that explains everything you ever want to know about childhood, works uncommonly well by modulating its humor and toning its irony. The poet’s persona opens this childhood chronicle by insisting, “I tell my mother the truth.” Indeed she does. A young Cassandra, this protagonist confronts the grown-ups that run her world. Here’s one pretty funny stanza,

I tell my parents my baby brother can talk.

They never believe me.

Playing upstairs, I say to him

He says whatever I tell him.

When they put him in the high chair

and he wants something,

all he has to do is point and say Ummm

and they jump to get it.

Sometimes chance intervenes and childhood memories need revising. Desrosiers, in her poem My Violin, learns the difference between a student violin and a professional instrument years after discontinuing her lessons. Illuminations like this can upset an artist’s complacency and assumed self-knowledge. The piece concludes by separating the artist from the instrument,

Scheherazade on the music stand,

asked if I could try, it was one we played.

So shocked I almost dropped the instrument.

She explained it was the violin.

If only I had known,

all those years in High School

when I sounded worse than

everyone else, no matter

how hard I practiced.

It was my student violin

That lacked resonance, not I.

Good art ages well, but good artists sometimes not so much. In her poem entitled My Brother’s Voice Desrosiers chronicles her family’s genetic choral talents. Inheritance proceeds not in straight lines, but unpredictably, in many artistic families. Wrinkles inevitably appear and intertwine with everyday life. Consider this cruel misdirection of nature,

Dad would try to sing

Loudly, out of tune, the Marseillaise

Running into the ocean.

When he was seven

they removed his right eardrum.

on our mother’s side

and snippets of operas

as he cooked fried matzo.

My favorite piece in this collection is a well-crafted poem entitled Sestina for my Daughter Margot.  Desrosiers navigates successfully between the dual shoals of sentiment and regret into a sea of reconciliation and potential. Vocal memories and music are the oars that get her there. The repetition of word endings in this classic sestina work beautifully by controlling and channeling the emotion. Here’s two of the more telling stanzas,

Amazing now, our closeness of late.

You call me often on your own.

You visit me and hold my hand,

I bask in the timbre of your voice.

For a time you and I were left.

We played together, slept late,

figured out our future on our own,

Years went by before the fear was gone.

Reverie Obscura, Desrosiers clever meditation on the art of poetry, catches reality in a novel way. The poem begins as a panorama, then progresses into a camera obscura metaphor, where the world appears through pin holes as platonic projections, only upside down. Consider how the poet exits that world,

Then we are on a train, going backwards.

The world goes by upside down,

We sit upside down

To see the world right side up.

And I am falling now,

Falling out of this poem.

As Desrosiers’ persona tumbles back to human actuality and its constrained visions, her poems seem to continue on. One oral memory after another hesitates like a charmed particle in “time’s flutter,” then spins off into the arcing buzz of space.  Singular poems like these orbit their readers.

Other Titles from Lori Desrosiers 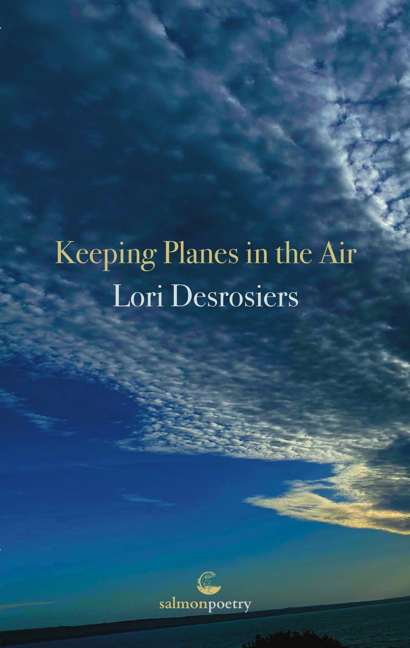 Keeping Planes in the Air 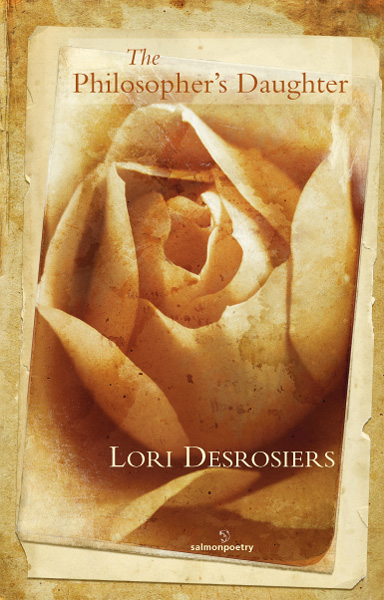