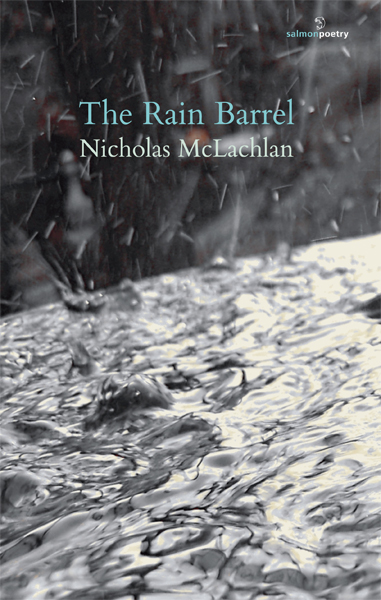 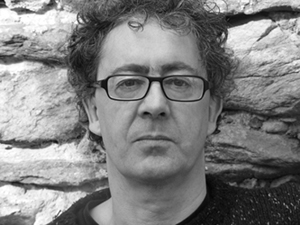 Nicholas McLachlan was born in Dublin and lived for many years in lower Leeson Street, Hatch Place and York Street. After a long career as an athlete with Donore Harriers he moved to Kerry to write. His poems have appeared in a variety of journals, anthologies, broadsheets, artist catalogues and festschrifts and he was selected for the Poetry Ireland Introductions series in 2004. His first published short story won the Martin Healy Short Story Award. His stories have been published in The Irish Times, Force 10 and the Cork Literary Review. He has produced and edited two books: 80mph – A Festschrift for Leland Bardwell and Ildána, a bi-lingual book featuring the work of over eighty west Kerry artists and writers. He is a tutor on the creative writing adult education programme in Dingle. For fifteen years he was director of Dingle Writing Courses, an organisation he founded with his partner Abigail Joffe. He lives under Mount Eagle in Ventry, County Kerry. The Rain Barrel is his first poetry collection.
Nature
Above my head
grape vines under glass,
the green flare of growth
clothing the long stem
in sunlight and shadow
of a May morning.
Outside, just feet away,
where the black ink of winter
pools on the roots
of reed and bog iris
translucent green shoots appear
hour on hour.
The season
asserts herself,
both outdoors and in.
My son, all of a sudden fifteen,
my height, my shoe size,
the physique of a welterweight.
How I didn’t hear his voice break
I don’t know. Perhaps
because it occurred
when the raw light
of bud and leaf was so
blindingly centre stage.
Much later I realised
his was the voice
of a second man
in a house
where previously
one man lived.
Hooded Crow
Low tide attracts them, as it does me.
A long beach exposed, no two days the same.
The one I meet, a regular here,
is holding his ground: a strip of sand
west of the estuary and the metal bridge.
And yes, I’ve studied his pre-lift off routine –
the pinprick of light in his night-black eye;
how he sinks, clicks, locks his body weight
onto deceptively thin, biro spring legs.
There are others of course, furtive, shifty,
who likewise patrol the shore in two-tone garb.
I saw one boyo take the wind escalator skywards.
He came back down the same way he went up.
Onions
I found the onions at ten yard intervals when
I was measuring my stride against the beach’s usual length.
The tide had tossed them onto the sand
and then retreated, leaving each onion
at odds with the ordinary wisps of seaweed,
shells and pebbles otherwise aground on the shore.
They had been polished by some turbulent force
or combination of forces involving an abrasive
and the application of a thin oily gloss.
Some were bruised and leathery, with peeling skin,
others had found their equilibrium in a sand-nest
or were lolling to one side with root strings trailing.
I scanned the shoreline until I found one
that was most true to its condition,
had the peculiar size to weight ratio I was looking for,
sat easily in the palm of my hand. When I bowled it
down the beach it rolled like a severed head,
landed against a clump of weed with an audible groan.