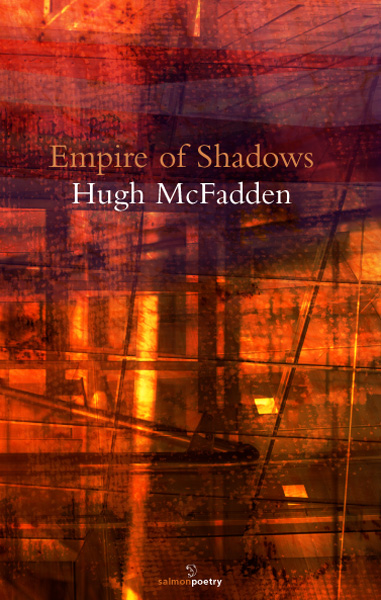 Hugh McFadden is a poet, critic, and literary editor. Born in Derry, he lives in Dublin. His poems have been published widely in literary magazines in Ireland and Britain. He is the author of three collections of poetry, including Elegies & Epiphanies (Lagan Press, Belfast, 2005). He is the executor of the literary estate of the writer John Jordan, and edited his collected poems and collected short stories, as well as John Jordan: Selected Poems (Dedalus Press, Dublin, 2008). He has reviewed for a variety of papers & journals, including Hibernia, The Irish Independent, The Irish Press, The Irish Times, The Sunday Tribune and Books Ireland.
Empire of Shadows
When the great hammer blow descended
it came suddenly, right out of the blue,
unexpected, out of a clear blue sky.
On the ground, moments before the blast,
it was a calm, sunny, Monday morning.
Those closest to the blast died instantly,
their bodies turned to crisp black charcoal.
Nearby birds burst into flames in mid-air,
and combustible materials like
paper, or skin, ignited instantly –
as far away as 6,000 feet from
the epicentre, or ground zero.
The white light acted as a huge flashbulb
burning the dark patterns of clothing on
skin and shadows of bodies onto walls.
Survivors outdoors close to the blast
described a literally blinding light,
combined with an enormous wave of heat.
The city was hidden by that awful
cloud … boiling up, mushrooming, terrible.
Sixty years after that cataclysm
someone in power wrote the following:
The war on terror involves enemies
hidden among us who hate our values,
who will use any weapons against us …
in the age of post-modern irony.
Below the Bridge
The sun had warmed the wooden seat for me
on the bank of the River Fane
situated below the old stone bridge
at Inniskeen. And as I write this verse
out, Patrick Kavanagh, I think of you
sitting below the bridge at Baggot Street
on the bank of the Grand Canal,
one warm and sunny summer’s day
sometime in the middle ’Sixties –
perhaps the year was Sixty-Four or Six –
Anyway, you sat there then, as tranquil
as any Buddha ever did,
although, of course, you said yourself
you messaged no message at all
only simple joy at nature’s beauty
and, by God’s grace, peace at its heart.
As I write this, the sound of the water,
while it rushes over the flashing stones
rippling and breaking in the clear daylight,
mingles with the strains of music
drifting on the air near your own Centre,
as a white butterfly flits by the brown
river – its lush green bank all overgrown –
My heart’s spirit lifts with the rising day:
All the cares of the city far away.
By the Pool of Despond
There it is in the centre, hanging from the sky,
the secretive lodge of the King of Discord,
the large central hall of the twisted wizard.
Straight in front of it is no huge knotted elm
but a round metal tree, all its leaves Fools’ Gold.
Here it was, they say, that all the vain dreams died …
not a single acrostic leaf left unbroken.
Late at night waves of denizens can be seen
walking slowly backwards towards the temple’s bars,
their glazed eyes set deep into their twisted heads.
All these well-dressed Cimmermen, who tried to see
too far ahead, now look behind themselves
and, retrograde, retreat into history.
Dream-like they pass on through the ivory gate,
lost in deep discourse, shapes shift into shadow,
as around them resounds an hypnotic beat …
hidden in darkness, someone breaks off a bough.
Dense fog has obscured the descent through the arch
down to the river, which runs cold and dark
past the hall once free, now mired in debt …
and way out to the sea where the moon will set.
Copyright © Hugh McFadden 2012