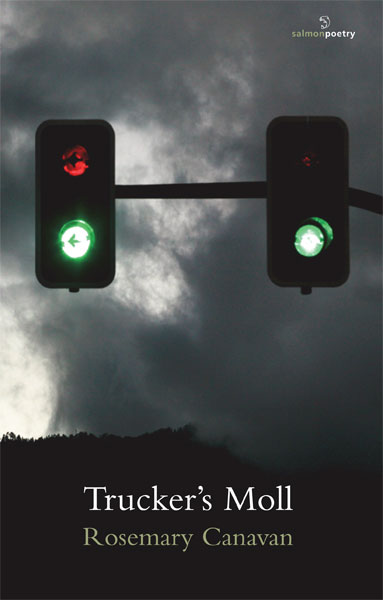 
Canavan understands the power of the lyric; her poems overlap and fuse, creating an, at times, rough and richly patterned collection. Colour is everywhere, used as the painters brush to transform, to make real -

Rosemary Canavan was born in Scotland, and brought up in County Antrim. Her first collection The Island was published by Story Line Press, and was shortlisted for the Vincent Buckley Poetry Prize at the University of Melbourne, Australia. In 2001 she was Writer-in-Residence for Co. Kerry, and from 2006-7 she was Poetry Editor for Southword. She has worked as a graphic designer, and a teacher in varied locations including Belfast, and Spike Island and Cork Prisons. At present she teaches Creative Writing in County Cork.
High Country

You remember these places exist
by looking at old maps
so long unopened
they crack and seem to fade
at the touch;

shackled too long
to a trip on a Sunday afternoon,
today I have run away
to a land between being and nothingness
where lyre-birds play,

have left behind
grey hutches
which break the souls
of young girls and men,
and taking Fitz's old bohereen,

a pot-bellied tower signals my Waterloo,
the trainline levels the hillside
and all signs
point back to the city
but I go the other way

and emerge from bog-girt plains
to the shock of snow-covered hills
on a day when snow was immanent.
At Bweeng, a barn
of a church, and a great crucifix

Trucker's Moll: Several of the 33 poems in Rosemary Canavan's second collection look and read like incantations, the lines so short, the imagery so sparse.

In The Fisherman the short lines help to convey suspense, angst, so that a sense of relief is rendered by the longer lines of the last stanza, when "... all I had though about him/was false, or about another".

The title poem begins with the "moll" of the title observing the activities in a compound, somewhere south of the Rock of Cashel, where "steel levianthans" are preparing for a long-haul trip.

The truck she travels in, "...a trucker's home from home," is loaded: "the stonegrinder for England is a dark hunched lump." It departs from somewhere south of Fermoy and heads for Scotland (the poet's birthplace), then down through Britain, then returns via fishguard to Youghal, the "....we plunge into/the final soft darkness towards Cork."

Men of the South is based on, indeed a tribute to, Sean Keating's masterpiece of the same title, in Cork's Crawford Gallery: "Come close enough/you can almost smell/the wet wool of their cloth..."

In Rostellan a walk in the "ghost-laden" woods becomes a kind of self-examination: "I am restless/until the place/gives up its secrets...."

This observation reveals a current of emotional energy that runs through virtually all the poems.

Indeed, throughout this impressive collection the attentive reader will be rewarded by her capacities for sharp observation, low-keyed, economical wording, and carefully restrained ironies, whether writing about truck drivers or nurses, Cork patriots or Welsh ironies.

This review appeared in the printed version of the Irish Examiner Monday, June 22, 2009

You don't need a lot of words to send a message. "Trucker's Moll" is the simple and honest work of Rosemary Canavan, an accomplished poet who can call both Scotland and Ireland her home. Her poetry reflects upon her heritage with simple stories and verse that speak louder and longer than they appear. "Trucker's Moll" is a choice pick for international poetry collections, recommended.

She was the still mentor
of the house,
the hearth goddess.

At first you saw darkness,
then a small figure by the range
feeding the fire,

outside
her brother with sleeves rolled
splitting wood for it.