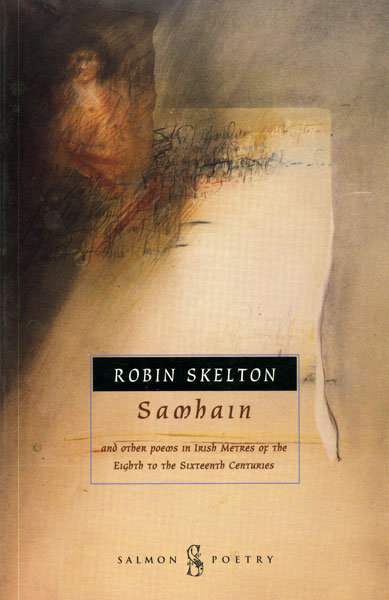 "...In the Renaissance, English poets imported verse forms and metres from the continent of Europe, but, with a couple of exceptions, failed to note the wealth of formal artistry even closer at hand. Indeed, so far as I am aware, nobody has seriously attempted to carry the Irish formulae over into English, though Welsh has been more often tackled.

One reason for this may be that the metrics of Irish lyric are so complex and sophisticated that they are inclined to put world-be imitators off. A number of Irish scholars went on record as calling them difficult: regarding the deibide (or deibhidhe) as 'the hardest thing under the sun' (O'Molloy), and 'The most difficult and scientific of all the classical forms of verse' (Eleanor Hull)...

...I have myself composed poems in these Irish metres for several reasons. Firstly, I was simply curious as to whether or not these forms could be used in English, and how working with them would affect both my style and my thinking. Secondly, having already tackled the metres of Wales, I wished to complete my exploration of the verse of my Celtic ancestors. Thirdly, I fell in love with the beautiful complexities, the possibilities of harmony, and the grace of these forms and that was, perhaps, the strongest compulsion of all."

As well as poems, Samhain also contains 10 pages of explanation of the individual metres used.

Robin Skelton, a major figure in Britsh and Canadian literature, was born in Yorkshire in 1925 and lived in Victoria, British Columbia, until his death in 1997. He taught at the University of Victoria for almost 30 years; mentoring many of Canada's now-established writers. In the 1960s he became fascinated with Irish poetry and edited work by JM Synge and Jack B. Yeats, as well as "Six Irish Poets" (Oxford University Press, 1962) which includes work from John Montague, Richard Murphy and Austin Clarke. Robin Skelton published over 100 books in his remarkable career. Samhain is part of a larger project in which he composed poetry in other Celtic verse forms.

Two in a Garden
(Ae Freslige)

Lovers, we lie wondering
why our amorous leisure's
marred by spectres blundering
through our pastoral pleasures

under trees' tranquility
blossoming boughs above us,
whispering futility
and names of other lovers.